All right, maybe it doesn’t sound like that. More like: ”Baaah” or if one is onomatopoetic (imitative of a sound or a noise), one can always make vomit sounds. Although, if one is unable to live with the immense embarrassment for the rest of one’s life, it’s acceptable if one look up the video of the screaming goat.

Now, the reason why a goat is even mentioned is because today’s a special day. Possibly everyone already knows of it but I’ll give you some information if you live in a cave, in a pineapple or are simply unable to get some Internet. Today, is CHINESE NEW YEAR! HELL YEAH!

“What? Chinese New Year? Don’t they celebrate New Year like we do?” you definitely won’t say.

Sure, the Chinese do follow after the Gregorian (Western) Calendar, just like the majority of this world, which is more likely due to practical reasons. However, most Chinese holidays are based on the Lunar Calendar, a calendar based on the moon phases. (Seriously, poor werewolf child.)

That is why the Chinese New Year happens on different dates each year in a repeating cycle of 12 years, between 21st January and 19th February, (which is today! Gasp!) So, where does the Goat come in this shtick? Well, lads and lasses, according to the Chinese Astrology it is the year and not the months that decides what zodiac one is.

The most widespread legend about the Chinese zodiacs has to be The Jade Emperor.

The Emperor was to hold a banquet and informed everyone that animals would be designated as calendar signs; the 12 animals that arrived first would be selected. At the time, Rat and Cat were good friends. When they heard of the news, Cat said to Rat; “We should arrive early to sign up, but I usually get up late.” Rat promised to awaken his friend and go together. However, on the morning when he got up, he was too excited to recall his promise, and went directly to the gathering place.

On the way, Rat encountered other animals that ran much faster. In order to not fall behind them, he thought up of a good idea; he made the Ox carry him on condition that he sang for the it. Once they arrived, Rat had slid in front of Ox and thus, became the first lucky animal of the Chinese Zodiac. Meanwhile, Cat was too late when he finally arrived and was excluded from the selection. Poor cat.

So, now you know. Be sure to wish your friends a Happy Chinese New Year, folks! If you fancy being all traditional, go ahead with “Gong Xi Fa Cai!” 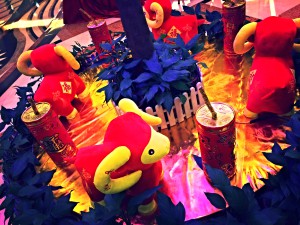